Technological Retreat on KFAI in Minneapolis. Broadcasting out of the belfry of the Walker church with more energy than the signal physical building could ever handle.

I started volunteering at KFAI in MPLS, MN in April of 1985 and was producing and hosting a late night show by November. Technological Retreat, from 1:00 AM to 6:00 AM on Sunday night / Monday morning. I made Sound Collages – the live layering and mixing of sounds. They could be moments or last for an hour or more. The mixes were not dance or sample based mixes, more like soundtracks. Mood Music on the edge.

This is what the world sounded like to me 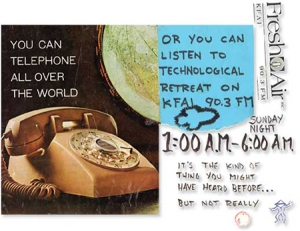 The first years that I lived in Minneapolis I spent a lot of time climbing around in and on the bridges that cross the Mississippi river. On the downtown side of the old Hennepin Ave Bridge the catwalk and sub-structure of the bridge were close enough to the metal grid surface that you could put your head next to it and feel and hear the cars before seeing the shadows move over head as the bridge shook. Sounds and vibrations of the cars coming and going. I was taking a technological retreat into the urban environment by climbing. The same thing I had done living in Colorado and Montana except now it was bridges and buildings instead of rocks and mountains. Today you would be arrested as a terrorist or something for doing the same kind of thing.

This is what the world sounded like to me, that’s what I was trying to recreate with the radio studio every week, my response to the continual mix of sounds that was the world in the mid 1980’s. One sound wasn’t enough because there was always more going on. I called them sound collage. Material taken from record and tape collections, field and bridge and building and original recordings. Like any collage, the pieces are the medium for creating a new work. I used preexisting recordings as the raw material for creating my own sound collages.

I had a Tascam Porta 1 which was a 4 Track, DBX quality, 10 – C battery powered portable tape recorder. I would take this everywhere and record as many of the sounds of the city as I could. Fill up one track, flip the tape and fill that. Do that twice more or variations. Bring these tapes into the radio station every week and play them as sound beds. So many times the random combination of sounds would be incredible. 4 Track and a few small audio effect boxes and some cables. I’d plug my stuff into the studio patch bay and rewire the studio for a few hours every week. There is part of a magazine article about the sculptor Giacometti still pasted on my digital delay: “His best work he believes, is done after hours and hours of work, when he is so tired that his intelligence has lost control.”

Who was up and listening to the radio at 2:30 in the freaking morning on a Sunday night? Normal people were sleeping because they had to go to work in the morning. Who was up? People getting out of bars, artists working in unheated studios, freaks, third-shifters, cab drivers, students, addicts and alcoholics; hospital, prison and warehouse workers among others. A perfect audience for presenting something out of the ordinary to.

It was fun. It was the most consistent and sustained fun I’ve ever had. I would mix until I was too tired to concentrate, then just play one piece of music at a time, like a regular radio show. It would also take some time to unplug and rewire the station back to its normal state. Besides, who wants to wake up to the sounds of my brain spilling out? Not all the people who were waking up between 5:00AM & 6:00 AM on Monday. There were two very distinct audiences for the show, and I tried to cater to and respect both. Radio used to be a time specific medium.

Over Twenty years later INNOVA Records produced and released a CD of some of these sound collages. 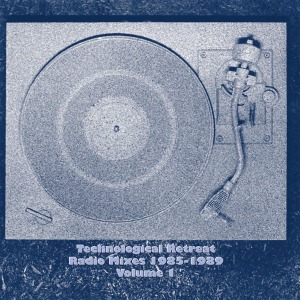 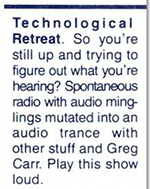 The following is from the bio on the Innova site.

Between the hours of 1am and 6am, in the late 1980s, Greg Carr created a show called Technological Retreat on community radio station KFAI in Minneapolis. Long before mash-ups, Carr worked multiple turntables, tape loops, field recordings, and sundry effects into “surreal radio minced with audio minglings and mutant responses…” mixed live into a free-form sound collage.

From the liner notes: “He made a radio station into a musical instrument, its’ turntables and tape players and switches and knobs into the buttons of his clarinet, the strings of his guitar.”

Limited to 500 copies. Includes a signed, numbered fragment from a collage inspired by memories of this unique radio show.

This disc is a weird spin…sounding something like two or three radios and televisions being switched from channel to channel during the course of an hour. It is difficult indeed to attempt to rate something like this…so we won’t.

…an ecstatic document. This is analog madness, prime with a technology-regulated aesthetic of rough splices and pure chance. Greg Carr’s work is not only beautiful, but communicates the weirdness only radio transmissions could provide and, likewise, the joy one felt when finding something exactly like Technological Retreat gurgling from his pre-dawn speakers.

Back in my college radio days, I infrequently tried my hand at this sort of thing. It’s harder than it sounds — such collaging requires stamina and foresight — but provides a rush when it all aligns, even if it is ephemeral radio noise. Perhaps you know instinctively that Bach’s violin partitas go well over a Nairobi beat, or that Bruckner and Les Baxter can jive. Effortless gear-shifting is a requirement and Carr is a pro.

I really enjoyed hearing this! It took me to some nice places. Being from Minneapolis myself I was happy to discover another fascinating facet of my hometown’s culture!

One of those rare albums that truly creates a new and compelling sound. Wildly inventive and remarkably modern for its age, this is an invaluable treasure…